What Is Economy Picking? 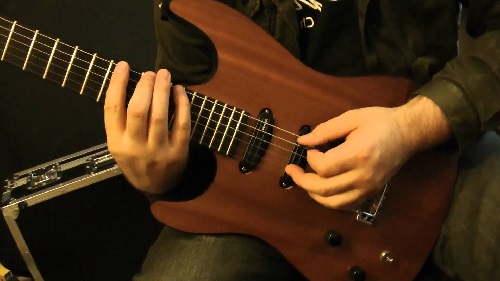 The basis for all economy picking techniques, is using the same picking motion over more†different strings. Think of it this way: if you are playing on a single string, the best way to increase your note speed, is to use alternating up-and-down picking.

This is alternate picking. If you are playing a sequence of notes across two or more strings, you would play them quickly by sweeping the pick down in one continuous motion.

Economy picking simply combines these two methods together. When the notes are on the same string, alternate picking is used. However, when the notes are spread across different strings in a sequence, the direction of picking motion is preserved. This “economical” movement results in a speedier and controlled way of picking notes.

What is Economy Picking on Guitar?

When you economy pick:

To learn to economy pick:

But there is also an even number of notes per string and alternate picking just doesn’t cut it, you can use hammer ons or pull offs to achieve the speed while maintaining economy picking flow. See the second exercise for an example of how to do this.

Good Songs That You Can Use for Practising Economy Picking

You may find that you integrate economy guitar picking techniques into parts of songs, or only in certain styles that play. It is not crucial that you learn one technique and stick to it all the time.

If you are a fairly new guitar player, particularly if you play electric guitar, you will probably come across a lot of references to picking techniques.

Some guitarists swear by a certain technique while others use a mixture of styles. Economy picking is one of these hybrid techniques.

For more exercises, go to: http://www.guitarplayerworld.com/techniques/economy-picking/

With the tone of a 12-string guitar and a powerful violin solo, “Dust in the Wind” became one of the greatest hits of the 70’s. Using a Nashville tuning and Travis style picking, Kansas created a classic song almost as mystifying as its accompanying lyrics.

Even though there are two guitarists in this song, the Dust in the Wind tabs show that all the chord positions are the same for both musicians. Using two six-string guitars, Kansas emulated a 12-string by setting one of them in a Nashville Tuning. This alternate tuning features all 4 low strings set an octave higher than standard, using plain strings instead of wound. When both instruments are played simultaneously, a few effects are created, including a ‘chime’ from the resulting octave intervals, and a ‘chorus’ effect from the timing differences.

Coupled with Travis Picking (where the right hand fingerpicks a steady and consistent pattern, while the left-hand performs chord changes), we can hear the Dust in the Wind chords become more expressive- which creates a perfectly dynamic base for this song’s legendary lyrics. Boosted by its viola and violin driven bridge, this is one song that won’t fade away any time soon.